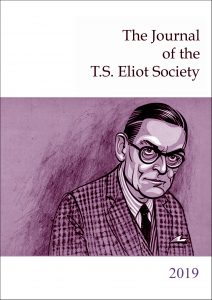 The 2019 edition of the academic Journal of the TS Eliot Society has just been published.

Edited by Dr Scott Freer, the 2019 edition contains essays by William Myers and Benedict Jones-Williams; interviews with artists Mat Collishaw and Julian Peters by Scott Freer; and book reviews by Jaron Murphy. Full details of the contents are below.

The Journal is £8.00; send a cheque payable to TS Eliot Society to the Secretary at 73A Mill Road, Cambridge, CB1 2AW, with a self-addressed C5 envelope, stamped with £1.50 of postage. Copies will also be available at the TS Eliot Festival at Little Gidding on 7th July.

Members of the Society are entitled to a free copy of the Journal; either pick yours up at the Festival, or send a self-addressed stamped envelope to the Secretary as above.

Contents of the 2019 edition

The Journal of the TS Eliot Society

The Journal of the T.S. Eliot Society (UK) is a peer-reviewed journal that annually publishes scholarly essays by leading as well as early career academics.

As well as articles focused on T.S. Eliot, the journal is interested in contributions that examine his legacy and so will also appreciate comparative studies (e.g. TSE & Philip Larkin or TSE & Evelyn Waugh).

The annual deadline for submission is January 10th. The word length is 6-8,000.

Please forward your enquiries or a 300 word abstract to Dr Scott Freer (University of Leicester): Journal@tseliotsociety.uk

E-mail Secretary@tseliotsociety.uk to inquire whether a back issue is still available: